MUSIC FOR A RAINY TOWN 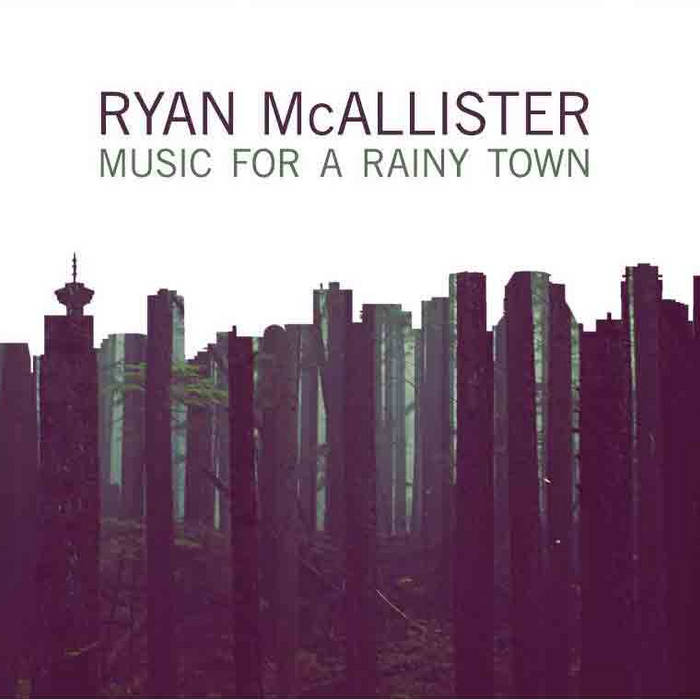 Jenny Soldan This is a amazing artist with killer vocals. I highly recommend him and can't wait to hear more from him! Check him out today. You will not be sorry. I can't wait till I get my CD in the mail! Favorite track: Mystery White Boy.

Ryan McAllister’s career began as the lead singer/songwriter for Dakona, a young Vancouver band that found themselves the subject of a seven label bidding war. They signed with Madonna’s Maverick Records and toured North America extensively. Following a massive reshuffling at Maverick, the band lost their deal and McAllister found his accidental profession, recording indie bands in the little rehersal space the Dakona boys had built with their record deal advance.

Today McAllister runs Five Acres, a professional recording studio in a converted barn a few steps from his home in a sleepy corner of Southwest B.C. He has taught himself the art of producing and recording, and has written plenty of music along the way. McAllister wrote, produced, recorded and mastered Music for a Rainy Town, his first solo effort. It is an honest, vulnerable and diverse record that covers the genre gamut between southern pop, story-telling folk, and straight-up rock. At times, it is reminiscent of artists like Tom Petty, Bruce Springsteen and John Mayer, but McAllister’s unique vocal stylings set it apart as something all its own. In an age of 99 cent singles, Music for a Rainy Town is a powerful 12 song album from front to back, with each track showcasing strong, seasoned storytelling, engaging melodies and lyrics steeped in imagery.

Ryan McAllister is a Canadian singer/songwriter. Over 20 years he has played thousands of concerts on five continents with artists ranging from Willy Nelson to Sam Roberts. He owns Five Acres Studio in Abbotsford BC where his work as a producer won a JUNO award. Ryan continues to champion Canadian indie music through his company valleymusic.co

Serves me right
Icarus am I
If only I wasn’t drawn to the sun
There’s the moon
Could she make me sing?
I’ll never know ‘cause I’ve lost both my wings

I, I, I
I’m coming over
I won’t take no from you
This black heart
is going under
and coming up new

When the whistle blows and I take my seat on the train
The engine steams and pulls out from the station in the rain
And the ones that I’ve loved
Wave their hands from the side of the tracks
Some laughed, some smiled but you cried
Cause you knew I wouldn’t be coming back

Did you find yourself that evening
On the eve of twenty-nine
Did you hear your father calling
Did you say your last goodbye
Did the feeling overtake you
In the midnight Memphis breeze
Were they singing hallelujah
Could you hear it in the trees?

Hey love, come home
I’ll protect you
As if you control tomorrow

Bandcamp Daily  your guide to the world of Bandcamp

Featuring Gary Bartz, 5 years of Rhythm Section Intl and an LP of the week by Nicolas Jaar